Home Everyday All About Riverfront Park in Spokane 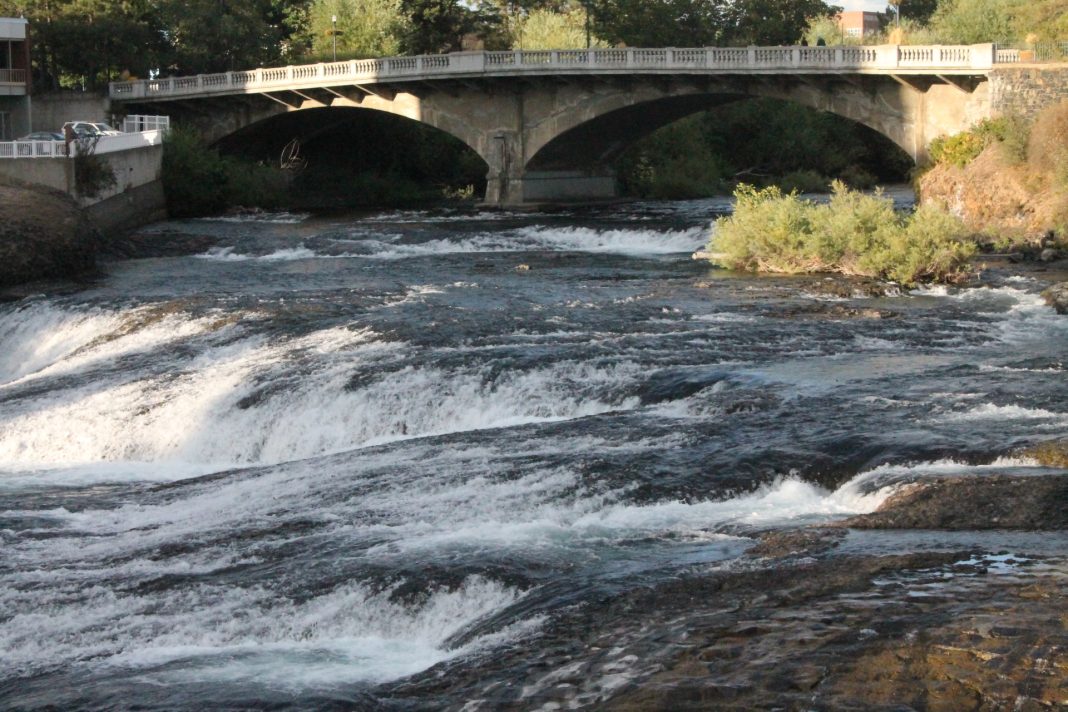 Walking through Spokane’s Riverfront Park today, it’s hard to imagine it was once the site of two railway depots. Trains used to cross the Spokane River on steel viaducts, and traffic downtown screeched to a halt during freight cars’ frequent comings and goings (HistoryLink.org).

That all changed when local organizations took on the unbelievable project of transforming Spokane’s downtown and creating the site for Expo ’74, a 1974 World’s Fair event, which would become the Riverfront Park you’d recognize today.

As of 2019, the park and some of its original attractions are getting a facelift. Citizens approved a $64 million bond for its redevelopment, and construction has been ongoing since the beginning of 2018.

The Centennial Trail stretches nearly 40 miles between Nine Mile Falls, Washington and the Washington/Idaho border. The fully paved path closely follows the Spokane River for most of that distance, and it is frequented by everyone from walkers to Lime scooter users.

You can begin an approximate five-mile roundtrip through the heart of Spokane by parking at Mission Park near Gonzaga University’s campus and heading west toward downtown. The path will take you by the Spokane Convention Center, past Riverfront Park’s best attractions, and all the way to a great view of Spokane Falls from Huntington Park.

If you’re coming from Gonzaga, you’ll cross over onto Havermale Island, the heart of Riverfront Park, via a wooden footbridge across from the Centennial Hotel.

The island was named after Reverend Samuel Havermale, an early Spokane settler who sold the land to the Great Northern railroad, according to an article by The Spokesman-Review. Two of Spokane’s most recognizable landmarks, the Great Northern Depot Clocktower and the Expo ‘74 Pavilion, are located on the island, along with plenty of walking trails, grass fields and park benches.

Havermale Island is at its busiest over Labor Day weekend for Pig Out in the Park, which brings three music stages and 50 food vendors to the park.

Once you’ve made it onto Havermale Island, head for the giant 150-some-foot Clocktower.

The Clocktower predates Riverfront Park and Expo ’74, as it was finished in 1902 as a part of the Great Northern Depot, according to the City of Spokane. About halfway up the east and west walls, you can see a sloping line where the depot roof was enclosed around the tower, the city says.

Per the City of Spokane, technicians climb five stories once a week to rewind the clock by hand and the clock’s pendulum weighs 200 pounds. Each clock face measures nine feet across, and there are speakers in the tower that amplify the clock’s electronic chime each hour.

Although the Pavilion is under construction through the summer of 2019, its famous silhouette of crisscrossing cables is still visible at the center of Havermale Island.

Built for the United States’ exhibit at Expo ’74, the Pavilion covered nearly 180,000 square feet under its original vinyl canopy. In the past, an IMAX theater, an ice rink and amusement park rides have been housed in and around the Pavilion.

Once construction is completed (projected for fall 2019), the Pavilion will include rentable shelters, green spaces and stairs to viewpoints. The space is also planned to host events like Hoopfest championships games, the Bloomsday Awards Ceremony and concerts, according to the city.

Snxw Mene? (pronounced sin-HOO-men-huh), most recently known as Canada Island, was rededicated to Spokane Tribe of Indians by the City of Spokane. The island’s new name translates to “salmon people” in English.

You can view the Upper Spokane Falls from the island’s northern suspension bridge, and the remnants of Crystal Laundry and Water Work’s building are visible from the southern bridge the connects to Havermale Island.

There is some ongoing construction in different parts of the area, so be aware of necessary detours before planning a walking or running route.

To get to the other side of Riverfront Park, you can cross at the South Howard Street Bridge, informally known as the “Orange Bridge.” Not only is it a great spot for a view down the Spokane River, but look for fun events here, especially throughout the summer months.

On the other side of the Orange Bridge, you can cool off in the Rotary Fountain, which sprays water from 40 spots overhead. It was first dedicated in 2005 and refurbished in 2018.

Just east of the Rotary Fountain, check out the 110-year-old Looff Carousel in its new building. The carousel debuted in Riverfront Park in 1975 and still has its original hand-carved wooden horses, giraffe, tiger and Chinese dragon chairs.

With the ice rink under the Pavilion gone, Riverfront Park debuted its new Skate Ribbon west of the carousel in winter 2017. But, the new attraction has the added bonus of functioning as a scooter and roller skate track in the warmer months.

On the other side of the Skate Ribbon, you can’t miss the purple gondolas of the SkyRide gondola, the best way to see Spokane Falls.

The City of Spokane states that the view of the falls is best from March through June when water levels are highest, but the attraction is open year-round with enclosed gondola cabins that seat six.

The 15-minute ride takes you past Spokane City Hall and over Huntington Park, before you turn around beneath the Monroe Street bridge.

Also, in the same area as the SkyRide and Skate Ribbon, Riverfront Park added two more kid-focused attractions in 2018 – jump high in the air and perform some acrobatics on the Spider Jump trampolines, or race around all of Riverfront Park with the whole family in four-wheeled pedal karts.

Keep an eye out, because this steel critter tends to blend into the rocks on the other side of the Looff Carousel building. Designed by Sister Paula Turnbull, a Catholic nun, for Expo ’74 as an environmental statement, Riverfront Park’s Garbage Goat eats small pieces of trash using a vacuum digestive system, according to the City of Spokane.

After you’ve fed the Garbage Goat, continue down the path toward the giant red Radio Flyer wagon you’ve probably caught glimpses of from other areas of the park. The sculpture was created by artist Ken Spiering in 1989, and the 27-foot long steel structure can support up to 300 people. Don’t leave before taking a slide down the wagon handle. ­­

Although it’s not in Riverfront Park, follow the path of the SkyRide just across Post Street to Huntington Park for the best view of lower Spokane Falls from the ground. The park has informational signs about the falls and its facilities, as well as green spaces and tables to enjoy the outdoors at.