On August 4, 1889, downtown Spokane went up in flames on a sultry Sunday evening in what is now called The Great Spokane Fire. Smoke had already been choking the skies for weeks as wildfires raged outside of town and in Coeur D’alene. High summer temperatures had contributed to catastrophic fires in other cities as well. A month earlier downtown Ellensburg burned to the ground in the Independence Day Fire, following The Great Seattle Fire of June 6.

In Spokane, a single flame sparked the terror as it escaped an oil stove in the attic of a rooming house. Normally, such a mishap might have been extinguished easily enough, but the dry conditions helped feed the flame. Spreading quickly, it morphed into an inferno that would envelop the whole business district before exhausting itself several hours later.

From the flashpoint on Railroad Avenue, the conflagration spread block by block. At first, some people didn’t know the seriousness of the situation, but that soon changed. Church bells rang out warnings in chorus with the roar of flames and the shouts of frantic people. A stiff southwest breeze whipped giant, slanted flames high into the skies, their intense heat filling the air like a cauldron. Chaos ensued as people ran in all directions, trying to quell the fire and save personal possessions. Adding to the cacophony, men blasted corner buildings with dynamite in an effort to stop the fire from jumping to the next city block. But it was all to no avail.

Sparks shot out like heat missiles and roofing and other debris shot into the air. The monstrous fire consumed wooden structures and left buildings of wood and granite in rubble. It destroyed store goods, personal possessions, banks, law offices, and The Northern Pacific Depot. The frantic populace faced the fury and watched everything melting before their eyes. Some drove frightened teams of horses and goods through the streets to save whatever they could. Volunteer firefighters, armed with water hoses, tried to quell the blaze until the water supply fell short. Their equipment failed and was not prepared for such a massive fire. For hours they heroically labored against all odds as their city burned.

In the aftermath, silence fell upon the town, which now looked like a war zone. A 32-block radius lay in ruins. Shocked and exhausted, onlookers tried to process their new reality. Those whose personal dwellings had been destroyed within the business district found themselves homeless. As bad as it was, the human spirit prevailed. Everyone started pitching in to help those in need and to access the damage. In fact, work began even while parts of the city still burned.

In the coming days, tents began popping up in front of destroyed businesses and government buildings. Everything lay in ruin. Piles of debris littered the streets. Spokane residents, and those from outside communities, began the heroic task of rebuilding a city from out of the rubble. Seattle donated money from their coffers, money procured for their own fire. New power poles and power lines replaced those that had burned. Groups of people were organized to clean up the streets. They collected scattered belongings and piled up bricks from crumbled buildings for orderly removal. Taking their devastation and disbelief while turning it into a new hope, they re-imagined a future to outrival the past from whence their city had sprung. That determination helped them triumph in the end.

The townspeople learned from their collective experience on that dark and terrifying night. They erected more granite and brick buildings and rebuilt their town rapidly. But challenges had to be overcome. The streets became muddy and hard to navigate without boots. Delivery men stacked construction material in the way and created roadblocks. Still, everyone pressed on. Their strength and resilience built a bigger and more enduring city that would last indefinitely.

Ever since The Great Spokane Fire, the city has grown. Those who lived through the tragedy are no longer alive to share their firsthand experiences. Yet their stories live on in books, photos, and journals as well as letters and newspaper articles. Spokane would become a bustling business district again and a powerhouse of industrial and agricultural production. From out of the ashes, the new Spokane rose and has since thrived.

For more information and photos visit The Great Spokane Fire. 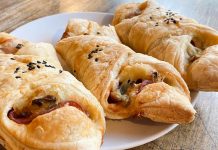 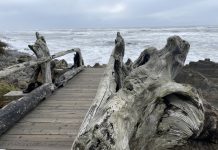 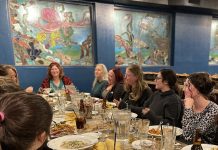 Visit the Old Alcohol Plant on the Olympic Peninsula: A Boutique Hotel, Restaurant and Art Gallery