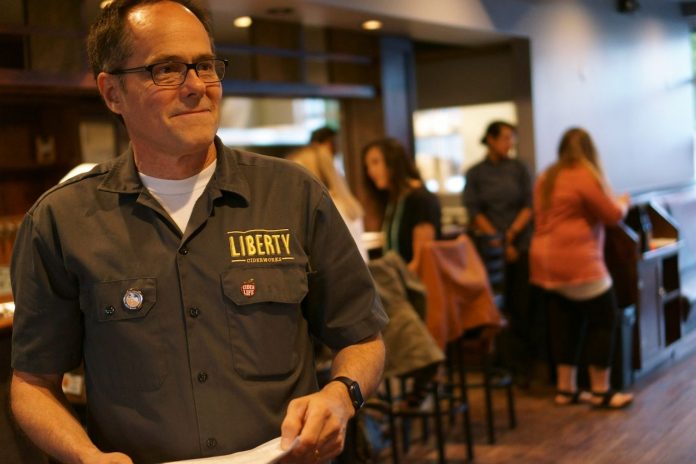 As Californians, the couple who entered Spokane’s Liberty Ciderworks taproom one Sunday afternoon were well-versed in the nuances of wine. However, since they were visiting Washington, the largest apple-growing region in the United States, they decided to try cider. As owner and founder Rick Hastings began explaining the breadth and range of flavor profiles within cidermaking, they were astonished. “They began to get excited about what they could pair with different varieties,” says Hastings. 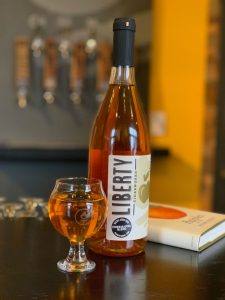 Hastings’ journey with cidermaking began approximately 10 years ago as an attempt to develop something his brother and sister-in-law could drink. “They had discovered they were gluten intolerant,” he explains. “We thought, instead of making beer in the basement, let’s see if there’s something else we can play with. Cider has no gluten and as we started trying different varieties, we found some we really loved.”

Not every home cidermaker makes the leap to commercial enterprise, but for Hastings, the turning point came when his cider began winning awards. “I started getting accolades for what I was making in my basement,” he recalls. “I was feeling pretty happy with what I was doing.” That recognition tipped the scale, along with an increasing awareness that although Spokane was rich in wineries and breweries, cideries were lacking. Hastings opened Liberty Ciderworks in 2013.

Liberty Ciderworks has won multiple awards at the regional, national and even international level, yet running the company is still not Hastings’ full-time job. He began homebrewing while working as a Senior Planner at Studio Cascade, a boutique community planning and design firm which had also won many state and national awards. Studio Cascade joined employee-owned firm SCJ Alliance in 2018 and Hastings still applies his planning craft there. 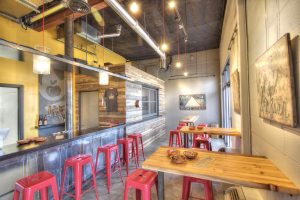 His two careers are dissimilar in many ways, but they do have a few things in common. “Both cidermaking and planning are a form of art to me,” he says. “They involve a lot of creative thinking and problem-solving. Cider is more visceral and immediate compared to putting together policy and master plans; planning is more abstract and cerebral. One provides a good break from the other. After a long day of working out planning policies, it’s nice to go and just put labels on bottles.”

At the same time, running a taproom has brought a new perspective to how Hastings approaches urban planning. He has seen firsthand how such plans affect the dynamic of a district and the small businesses that operate within it. “When we go to a meeting and begin talking about a downtown corridor, I can speak with a bit more authority about what works and what doesn’t, having owned a small business in the heart of a downtown,” he explains.

In many consumers’ minds, cidermaking is similar to brewing beer, but in fact, it’s more akin to winemaking, according to Hastings. It begins in the fall with the apple harvest. Once the crew has turned the produce into a form of chunky applesauce, the next step is pressing, or getting the juice out of the fruit and into large tanks, where fermentation begins.

One key difference from winemaking is cidermakers like Hastings use native yeast from the apples, within their flesh or on the skin, for fermentation. “Most commercial wineries and all breweries have to use a commercial strain of yeast,” he notes, “whereas we’re able to let nature do its thing.” Depending on the variety of apple, fermentation and aging can take up to four months each. 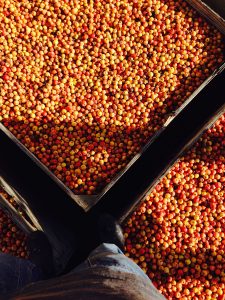 Like most industries, cidermaking has been disrupted by COVID-19. In 2019, Liberty Ciderworks invested heavily in equipment that would allow it to sell more products, but then the pandemic struck and keg and taproom sales tumbled. On the other hand, online sales and the number of clients purchasing through farmers’ markets have gone up since March. “They kind of balance each other out, but like everyone, we’re looking forward to a bit more normalcy,” says Hastings. “We want people to be able to gather again at the taproom and enjoy human contact and conversation.”

Looking ahead, he’d like to be part of a movement that restores cider to its former prominence in American society. “It was the drink of choice until the Industrial Revolution,” he says. “Then came Prohibition. It has only been about 10 years that we’ve had this cider Renaissance in the United States. I want to continue to be part of that.”

As the Spokane region continues to grow, it’s becoming known for its food, wineries and breweries. Hastings wants to see companies like Liberty Ciderworks be part of that regional reputation. And he has one more desire. “I’m aiming to become the first cidermaker in the Pacific Northwest nominated for a James Beard Award,” Hastings says with anticipation. We hope so too.